The Every Student Succeeds Act (ESSA) was signed into law by President Barack Obama in December 2015. President Donald Trump and Secretary of Education Betsy DeVos are now in control of its implementation and will likely try to use ESSA to support the agenda of school choice, charter schools and vouchers.

ESSA Under Trump and DeVos

Substantial changes to ESSA have already occurred under the new administration. The accountability and education regulations that were approved in October 2016 have been repealed by Congress. The president’s proposed FY18 budget eliminates long-standing ESSA programs; for example, Title II, Part A – Supporting Effective Instruction, a grant program that provides funding for educator professional development. Going forward, it is unclear exactly how ESSA requirements and programs will be affected. 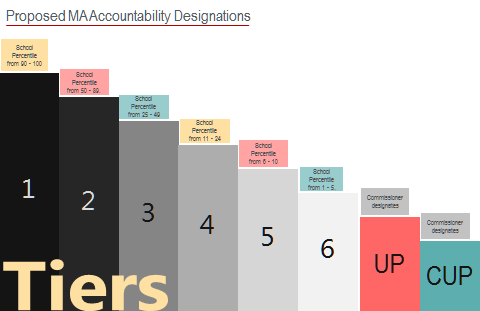 Despite the uncertainty, Massachusetts submitted its ESSA state plan, needed to qualify for Title I funding, on April 3, 2017.

The Massachusetts ESSA plan includes a “conceptual framework” for a substantial revision of the accountability system. The plan lacks many details about how this system will actually be implemented. Even at this conceptual stage, the system is even more complicated than the existing system.

Schools will continue to be labeled primarily based on various test-based indicators – average MCAS scaled scores, student growth percentiles and ACCESS results. Beyond test results, the system will include indicators of chronic absenteeism and course-passing rates for ninth-grade students. In addition, the improvement of high needs students on each of the indicators will be included in the calculations.

The MTA submitted comments on the state’s draft ESSA plan on March 9, 2017. Despite the requests of several commenters to delay submission of the plan until September, DESE submitted its plan on April 3.

On Dec. 10, 2015, President Obama signed the Every Student Succeeds Act. ESSA is the seventh reauthorization of the Elementary and Secondary Education Act first passed in 1965. ESSA replaces No Child Left Behind, the version of ESEA approved in 2001.

ESSA includes nine sections (titles) that establish requirements and provide funding for a number of federal education programs. Title 1 is the largest program, providing about $225 million for schools serving Massachusetts students in poverty.

NCLB mandated a number of accountability requirements, including establishing a goal of all students becoming “proficient” by 2014 and the imposing of “sanctions” on schools that did not make “adequate yearly progress” toward that goal.

Since 2012, Massachusetts schools have been operating under a “flexibility waiver” from many of the provisions of NCLB, including the adequate yearly progress requirements and actions that were mandated if such progress was not achieved. As a condition of the waiver, Massachusetts schools had to meet other requirements — notably, the development of a new educator evaluation system that was originally required for the state to receive Race to the Top funding.

ESSA was intended to represent a shift in the balance of authority between the U.S. Department of Education and state education agencies. Under ESSA, states were assigned more authority and flexibility. In some areas, including educator evaluation, the federal department is specifically prohibited from establishing any state requirements.

Schools will be ranked on each indicator and the indicator rankings will be weighted and averaged to create an overall percentile ranking for the school. Based on this overall ranking, schools will be assigned to one of six levels (now called “tiers.”).

For example, a school percentile of 90 to 100 will be designated Level 1. The commissioner will continue to have the authority to designate schools with percentiles of 10 and below (tiers 5 and 6) as “underperforming” (current Level 4) or “chronically underperforming” (current Level 5), resulting in eight possible designations instead of the current five.

Initially, the Mass. ESSA Plan included a number of so-called “input measures” — for example, measures of school climate, participation in arts education and access to arts education. In general, the MTA supports broader accountability indicators that go well beyond test scores. However, in the final version of the plan, these indicators have been eliminated from the accountability metric and relegated to a school report card; accountability designations will be based entirely on “output measures,” primarily test scores.